Truth – it's not what you think

Perception is not reality

How would you define truth?

Is it the "property of being in accord with fact or reality"? Wikipedia thinks so. The article also states that "Most commonly, truth is viewed as the correspondence of language or thought to a mind-independent world". Personally I don't think that's the case, and we'll explore why in this post.

The irony of a shareable definition of truth is that it consists of words in a language, which are quite imperfect representations of reality. Could a definition for truth ever actually be true, according to the idea that the language must correspond to a mind-independent world?

Let's begin our investigation of truth by looking at one of the best tools we have for finding it: science.

The scientific method is widely accepted as the most effective means of obtaining truth. Understanding how the universe works through observation, experimentation, and prediction increases our ability to control it. Science powers just about everything I do as an engineer. However, it is important to keep in mind that empirical scientific inquiry is not without limitations.

Soon after beginning my coursework toward a Master's Degree in Biomedical Engineering at the University of Virginia, my Physiology professor shared with us a marvelous article titled "Science Isn't Broken" by Christie Aschwanden at FiveThirtyEight. After providing an awesome interactive "p-hacking" example, she makes this insightful observation:

it’s much easier to get a result than it is to get an answer.

So what does that mean?

Google defines a result as follows:

a consequence, effect, or outcome of something.

The definition for an answer is significantly more debatable. Google gives the following:

a thing said, written, or done to deal with or as a reaction to a question, statement, or situation.

So what's the difference? You'll notice that the words 'said', 'written', 'done', 'question', and 'statement', all deal specifically with human thought and interaction. Thus we can say that a 'result' conceptually exists outside the context of subjective human cognition and interaction, whereas an answer, by definition, must exist within that context.

Do answers ever correspond with truth? If truth only corresponds to a mind independent world, and answers must exist within within the context of minds, we seem to have a problem.

I suggest to you that the scientific method doesn't give us answers. Raw science doesn't give us anything except results. It's the interpretation of those results which can provide answers, and those are always subjective, because they arise from the abstractions of our perspectives.

I personally like the following definition of abstraction from dictionary.com:

The act of considering something as a general quality or characteristic, apart from concrete realities, specific objects, or actual instances.

Basically, abstraction is a way of simplifying things to aid comprehension and cognitive utility. It's an extremely useful and necessary process.

Say I give you a word... "monkey" for example. Did an image pop into your head? Did it look something like this? 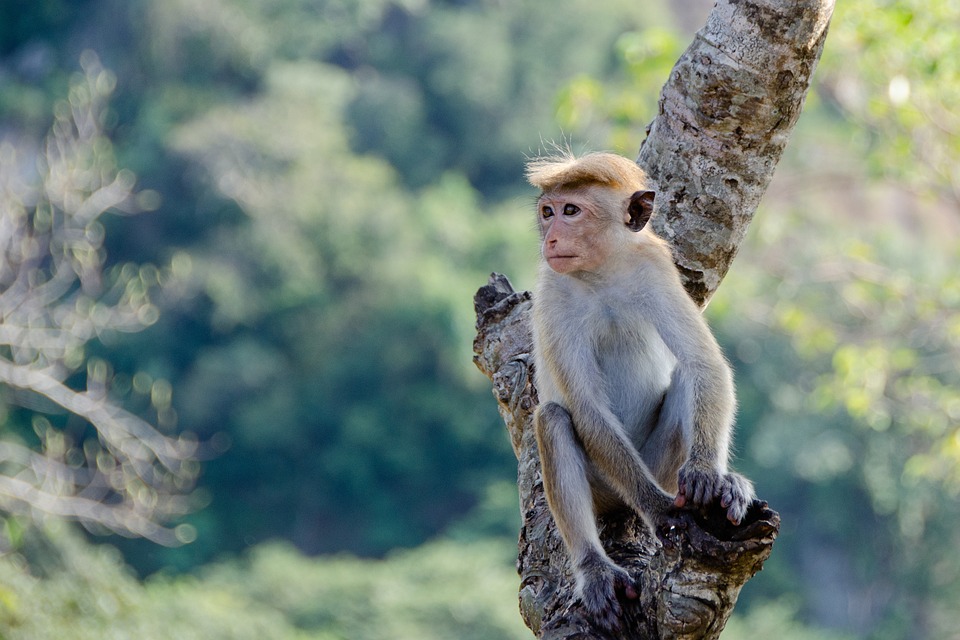 Is that a monkey? Are you sure?

If you said yes, you're completely wrong.

Because it's a picture. Duh.

Trick question you say? The word 'that' is ambiguous? I think we can all agree that the picture is a visual representation of a monkey – not the monkey itself. But regardless of whether 'that' in my question refers to the picture, or the monkey in the picture, you're still wrong either way.

We can infer from the image that, at some point in time, a monkey sat perched in this exact spot on this exact tree, but that monkey no longer exists. In fact, I would argue that (in a literal sense) this monkey, at the precise moment of the photo, was no longer in existence by the time the photons could be converted to electrical charges in the digital camera used to take the picture.

In a strictly technical sense, my conclusion is completely accurate, for the simple reason that it takes time for all of these things to occur. It is not instantaneous. Along those same lines, you are not the same person you were when you read my question a few seconds ago – technically speaking. Millions, perhaps billions of chemical interactions and changes took place in your mind and your body in those few seconds. Just as changes occurred in the monkey in that fraction of a millisecond.

By calling the monkey (or yourself) the same being now, is to assume that no changes that impact the definition of self occur over that time frame. I'm not saying it's a bad assumption – the quality of our assumptions depends entirely on context – but it is an assumption nonetheless. Therein arises the fact that everything we understand is actually an abstraction of reality.

Take a moment for self reflection. The words you are (presumably) reading on this page are becoming an abstraction of the words (ideas) in your mind. Language itself is an abstraction – a representation of experience with symbols for the purpose of communication.

So we throw up our hands in despair and exclaim, as Socrates of old:

All I know is that I know nothing.

Well, that depends entirely on you. I wont get too deep into epistemology here – but ultimately, certainty is a personal choice. In order to be certain about anything, assumptions must be made – points at which you simply assume something is true.

It is impossible to have certainty without assumptions.

The importance lies in what those assumptions are, and being consciously aware of them. Here are just a few:

People tend to assume certainty in what they perceive. This is necessary for survival to a degree. If you truly didn't trust your senses, you wouldn't act on them. Our capabilities for perception are fascinating but also have important limitations. Illusions (like these excellent ones by Michael Bach) are a great demonstration of that fact.

Everything we perceive is an abstraction, which leads to the logical conclusion:

Perception is not reality.

In this excellent presentation at the Royal Institution by Anil Seth, Professor of Cognitive and Computational Neuroscience at the University of Sussex, he describes perception as "controlled hallucinations". I think this is an excellent way to describe our conscious experience of reality.

People also tend to believe in general consensus; we tend to accept what most (or what we perceive as most) people believe as truth. This attitude is also problematic. Truth has never been dependent on the number that embrace it. But even beyond that, a significant amount of our perceived general consensus is actually an effect of what's known in psychology as the false-consensus effect. In other words, we assume most people believe things that they often don't.

We also tend to believe people we personally hold in relatively high esteem or regard, including parents, teachers, pastors, scientists, doctors, leaders, and (for some strange reason) politicians, among others. This also includes groups like corporations, non-profit organizations, activists, charities, or any other group that you personally hold in high esteem or regard. If you're anything like the average person, you will generally believe whatever they tell you.

Why is that a problem? It's a problem because these individuals and groups have biases. They have assumptions of their own. It does not matter if they claim to be a group dedicated to the truth. Everyone has bias. Everyone looks at things from different perspectives.

That's why consulting multiple sources (that aren't affiliated with one another) is a crucial technique in obtaining accurate information.

In fact, that's precisely how science works! People like to write headlines about the flashy new studies that show extraordinary results, but in reality, those are on shaky ground. One study that shows a particularly stunning result proves very little as far as truth is concerned, except that more research should be conducted. It's after we have several similar studies by unaffiliated groups showing identical results that we have something truly worth calling a "scientific fact".

The media industry (particularly social media) is one of the most frequent generators and propagators of lies, half-truths, and misinformation.

Ready for another question?

What do doctors do when a patient flatlines?

You know, when the patient no longer has any discernible electrical activity in the heart, also called an asystole or a "code".

They get the paddles, right? Shock that heart into submission until it beats like normal again, right!

See this fantastic blog post by a doctor about why they never shock a flatline. She'll also come to your home and beat you with a wet chicken.

If you thought shocking the heart with paddles was the correct answer, congratulations, you've been officially buying a lie from pretty much every movie or TV show with a hospital scene in it.

So why does the media like to obscure the truth so much?

First, truth and accuracy in storytelling takes a lot of work. Research is hard. Pseudoscience is relatively easy. It takes a lot more effort to research and present accurate truth than it does to just write off something that sounds like its true. I suspect screenwriters are typically only concerned with expending enough effort to achieve suspension of disbelief in their target audience.

Second, remember what I said above about the typical person believing in general consensus? What that means is that truth can sometimes work against the suspension of disbelief! The general audience will more quickly subconsciously accept certain lies, because it's what the media or other sources have been selling to them for years, and they've been buying. To show the truth would be to disrupt that pattern, causing a reduction in the suspension of disbelief, and therefore less mental investment in the story.

There are, of course, exceptions. But even documentaries aren't so trustworthy.

I think another major reason why Hollywood, businesses, news channels, websites, posts, and blogs often lie is due to the following extraordinarily important fact:

Lies are frequently more interesting. They obscure the relatively boring truth (at least, boring to the typical audience). This is why news channels, websites, and blogs often "spice up" their stories with ridiculously exaggerated or pretentious headlines.

There is a good reason we have distinctions between scientific journals and newspapers. Journalists aren't generally required to provide any significant evidence to support their claims – they just need to tell stories that get attention.

The same goes for anyone looking to make a buck off of you. There is great incentive for these individuals or entities to embellish the truth with fantastical ornamentation to get your attention – or to convince you that you absolutely need that new gadget.

If there's anything you take away from this, it should be this: try to understand the assumptions you make in determining what is true. Remember, you are biased. I am biased. Everyone is biased. Science is a great tool for acquiring relatively unbiased results, but the interpretation of those results (the answers) are always biased.

Keep all of this in mind before you attack someone else's point of view. Keep it in mind as you consider controversial topics.

Truth may be difficult to determine, but lies are easier. Take a good hard look at all of the truths you hold. Be honest with yourself. Be conscious of your assumptions and mental abstractions. By doing so you will be better equipped to purge falsehoods from your personal worldview.

Ideas I've had in my mind for nearly 20 years finally became words on a page. Looking back I'm actually glad I didn't write the novel sooner.